This article was originally published in Diary of A Croatian Larper and focuses on equipment and practises in Croatia. I’d like to see more about accommodation options for LARP and invite comments and views on both the information here other ideas regarding how to accommodate Larpers.  If you haven’t read Diary of a Croatian Larper – I strongly recommend it as a cool LARP Blog. – Rob

Now over to Ivan…

I’d like to talk a bit about sleeping systems and accommodations on multi-day fantasy larps – to provide a review of what is currently used in Croatian larps and what is generally available and possible, as well as benefits, downsides and costs of each option. I’ll divide it into three sections: modern, coolthentic and authentic.

This review doesn’t mention cabins, yurts, cottages etc. – which could be any of the three, depending on how they’re built and decorated. It’s focused on larps where you typically camp.

Modern tents are the first thing that comes to one’s mind when tents are mentioned. They’re widely available in all camping stores (and most general stores too). They’re compact, lightweight and space-efficient, and they’re reasonably priced – cheap ones start from around €10, but they’re typically awful – you can get a very decent one for €50. Cheap ones will not last

for a long time. Top of the line models can easily cost hundreds of euros.
Expensive ones will last for a few years, but even they won’t last forever. UV rays are unkind to the materials used. Repairing them is difficult, especially if one of the fiberglass rods is damaged. And last but not the least – they really look jarring in a medieval fantasy setting. Nothing ruins the illusion of being in a medieval-like environment faster than a field of fluorescent-colored plastic tents.
They are also quite uncomfortable (unless you get the big ones) – the synthetic material can’t really breathe, so cheap ones tend to have condensation issues. The thin barrier provides very little insulation, and the sun can get you up in the morning easily. More expensive, double-layered tents alleviate this to a point but they are also more expensive. If you want a really spacious model, prepare a large budget.
People typically sleep in them in sleeping bags, and on camping pads. Modern tents all typically have floors, which is both a good and a bad thing – it makes cooking or lighting any flame in them dangerous (due to CO buildup and not to mention all the flammable materials) and they’re a more unwieldy and don’t breathe as well – but they’re nearly impervious to insects.

Tarps are widely available and very versatile and universal. They are typically rectangular, and you can stretch them into any shape you find useful with a bit of ropework, poles and tent stakes, and sometimes not even all of those. Tarps require bringing a few more materials with you, and they’re a bit open – any setup will be open from at least one side, so no insect protection. That will make sleeping a bit colder than the tent (unless there’s a fire in front, in which case it will reflect the heat back to you – which will make it warmer than a tent). Also there’s typically no groundsheet (except in certain setups), so if you want something on your ground you might want to bring another tarp for a groundsheet.
This is one of the cheapest and most compact camping options around. A cheap tarp can be had for 4€. Add some rope (which can double up for the purpose of setting up camp) and it can double as a backpack.
With a little bit of extra money, you can get/make a canvas tarp instead. While heavier and more expensive, it’s also much more authentic, durable, fireproof and superior in most regards.

A lot of campers use modern sleeping bags for sleeping in their tents, as they are practical, functional and compact. But they can be used all by themselves, to sleep out in the open. However, most sleeping bags are not typically too resistant to wind and rain. If these two are an issue for the weekend you’re playing, it’s best to seek a shelter… 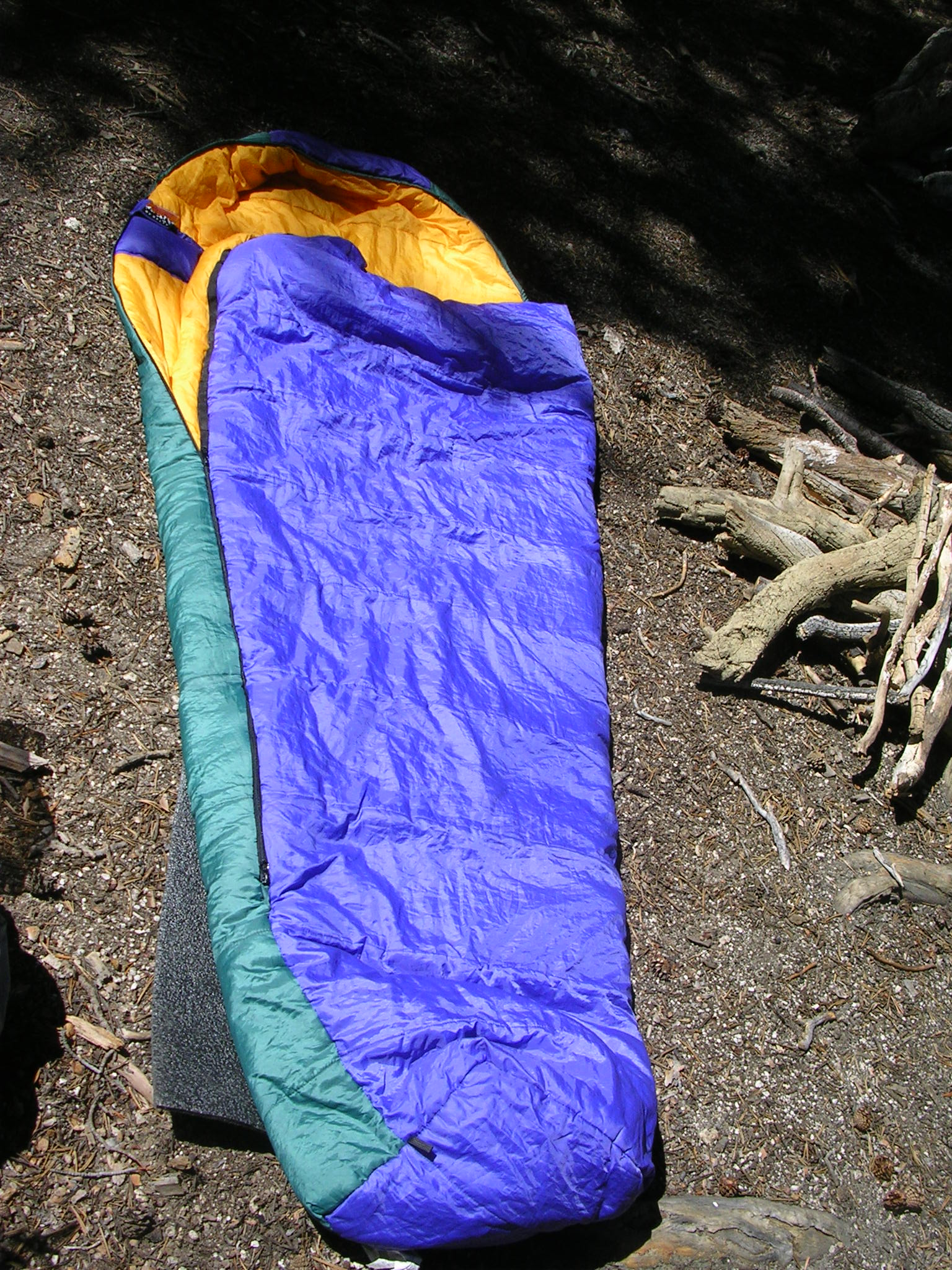 Or have a water/wind resistant bag, such as some military-issued ones. Or a bivy sack on top of your sleeping bag. If you just sleep in a cheap bag and no other protection and there’s a rain coming, you’re gonna have a bad time.
A good thing about carrying just a sleeping bag is that it can be rolled and put away while not in use – even if it’s got strong colors and an obviously modern look, it will not be as jarring as it’s not gonna be visible most of the day. You’ll still want a safe and dry spot for the rest of your stuff though.

Military and other canvas tents

Military tents are often used at larps where they are commonly accepted as… not really authentic, but “authentic enough” to be used in the in-character section of the event. From small military tents to the large halls made out of multi-section tents, the military nature of such tents is often ignored in favor of the fact that they’re made of canvas and as such they’re at least plausible in a fantasy setting (which is not strictly historically defined). Together with some other tents – a couple of decades old canvas tents for regular camping, and large party tents – these are commonly used on larps. Used and surplus military tents and tarps can be typically obtained for a reasonable price, and small tents of such type are commonly cheaper than modern tents – typically around €15-€30 range. And canvas can last a lifetime if properly maintained. Big ones are, of course, more expensive.

Good authentic medieval tents are top of the line where fantasy larping is concerned. Big ones are spacious and downright luxurious. They also look amazingly, add to the larp, you can play scenes in them and you can decorate them and personalize them to your own desires – they add awesome game space besides only providing for sleeping, and they’re awesome for scenery. 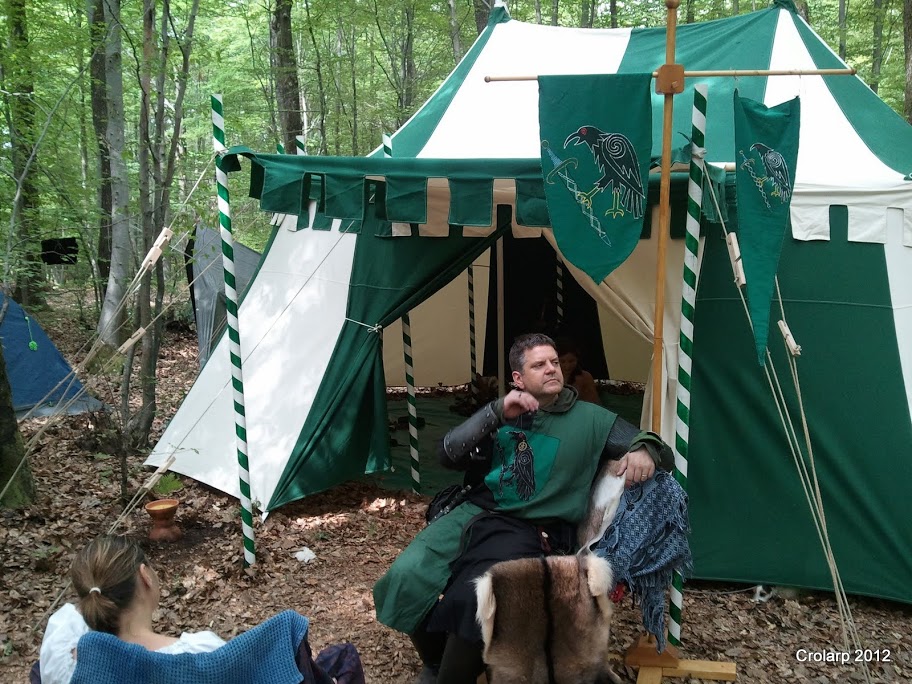 However, they cost a lot (typically hundreds of euros, comparable to high-end modern tents), they’re heavy, and they require significant transport space and setup time.
If you’re planning to build them yourself, great! You can do awesome stuff for about 100€ (or make small pup tents for significantly less).

This is the authentic version of sleeping bag/bivy sack that was used until not long ago. The main idea is to use heavy-duty, waterproof canvas as an outer layer. Inside, use some wool blankets. You wrap yourselves in blankets and then in canvas, as a burrito. All of it should be quite robust and able to survive rough weather and terrain. While not in use, roll it up all together and fasten with straps. Hence, it’s called a bedroll. Make your own or buy the already finished (and not cheap, you can buy a medieval tent for that much money) solutions. 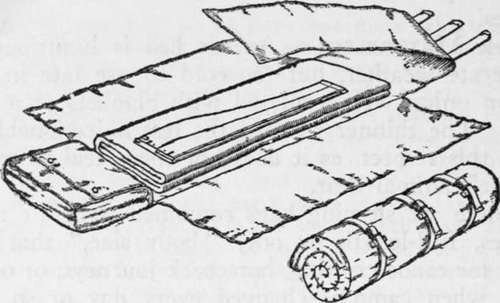 Use it in a tent, under a tarp or by itself (in which case you might still be bothered by the heavy rain, but you’ll be better off than in just a sleeping bag). Historically, it has typically been used all by itself. It has some room for stuff, more than a sleeping bag or bivy (though not as much as the tent).

Warm cloaks, ponchos and blankets can be slept in (depending on the weather), but they will not make you comfortable. They’re more of an emergency option. Carrying another blanket is always a good idea. Or if you’ve done any survival training (or if you’re a Bear Grylls fan) you can make a shelter from available materials.
Keep dry. Keep hydrated. Larp. If you’re larping in cold weather, here’s a few more tips.

Cheat mode: Play one-day larps to avoid the expense of in-character sleep gear. Or: create an off-game zone (out of sight, modern gear allowed) and off-game time during the night. These can help, but there’s a trade-off – they limit what you can show on a larp.

This site uses Akismet to reduce spam. Learn how your comment data is processed.

If you see something you like why not support us by buying a coffee. Every little helps! 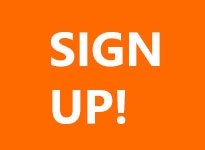